This guide is designed to support PSY-224 taught on CAMPUS by Dr. Peter Frost.

Instead of a final exam, this course will end with a class poster session during the last class time, Thursday, December 16, 2021 from 12:30-1:45 on the 2nd floor of the Shapiro Library in the Mezzanine area above the Zachos Cafe. You can either work by yourself or with one other student on your own research project, leading to a poster presentation that will address a research question of your choosing. Your poster should be in American Psychological Association (APA) format. This is an empirical research project where you will collect data. You are encouraged to conduct a survey, correlation, quasi-experiment or experiment depending on the type of question you are seeking to address. For those of you conducting survey research, you will have free access to software called Qualtrics which you can share with others with a link you can share through social media or with others in class.

Below are potential research questions, general methodological approaches, free and open access test materials, and example articles for your research project, though feel free to come up with your own. You will be expected to find other articles on your own using library databases.

What makes some people more prone to conspiracy theories than others? Psychologists have focused on individual differences, like existential needs for control and a tendency to mistrust others. But more recent research suggests that situational factors, like stress (associated with situations such as the pandemic), might exacerbate need for control and mistrust of others in some individuals. Your hypothesis could be that conspiracy beliefs are correlated with high stress, a high need for control, and mistrust.

Correlate measures of the need for control and level of overall mistrust of others with susceptibility to conspiracy beliefs.

Here is a secondary source (article) about the psychology of conspiracy theories. Under “existential motives,” it covers how some people are drawn to conspiracy theories to feel safe and exert control over others. This article can also lead you to primary research sources.

This article shows evidence that the conspiracy beliefs scale is valid and reliable:

Some research shows that people prone to conspiracies are prone to cognitive errors, including problems with analytical thinking and seeing patterns that don’t exist. But what about one’s judgment of their own cognition? Does the tendency to believe in conspiracy theory correlate with high confidence and less metacognitive accuracy? (Metacognitive accuracy refers to the ability to judge how well you actually know information with precision.)

Use the General Knowledge Test by Irwing, P., Cammock, T., & Lynn, R. (2001) with modification, including more up-to-date questions. Your instructor will make this modified test available to you. Have students answer an open-ended version of the General Knowledge Test without feedback. For each question, show the answer provided and ask the participant to rate the likelihood of recognizing the answer to the question in a 4-alternative forced-choice test: 25% confident (chance performance), 40%, 55%, 70%, 85%, and 100% (definitely would recognize). Have students take the 4-alternative, multiple-choice test version of the General Knowledge Test. Then correlate average ratings and test scores to measure metacognitive accuracy. Measure belief in conspiracy theories using the test referenced below. Compare the average metacognitive accuracy for people rated more prone to conspiracy theories versus those less prone (using the upper versus lower 50% of ranked scores). This study would be a mix of correlation and survey.

Somewhat related to this, some studies show that people with lower cognitive ability are not as likely to readjust their judgement after they learn that crucial information on which their initial evaluation was based was incorrect. This suggests that some people might be overconfident and perhaps misjudge their own cognition.

De keersmaecker, J. & Roets, A. (2017). ‘Fake news’: Incorrect, but hard to correct. The role of cognitive ability on the impact of false

Past research has shown that excessive use of Instagram is associated with negative mental health outcomes and poor appearance-related self-perception. Is excessive use of Instagram associated with negative mood and negative self-perception in a non-clinical population? Please note that you cannot assess clinical mental health disorders due to ethical restrictions in conducting research for an undergraduate course, but assessing mood carries less risk and would add a new angle to existing research literature.

Sherlock, M., & Wagstaff, D.L. (2018). Exploring the Relationship Between Frequency of Instagram Use, Exposure to Idealized Images,

and Psychological Well-Being in Women. Psychology of Popular Media Culture. 8(4), 482-490.

How do the Big 5 personality traits relate to preference for different genres of music? This would be a correlation study that would add something new by not only using the Big 5 Traits some subcomponents of those traits called facets and a new and updated test called the Big Five Inventory – 2.

Rentfrow, P. J., & Gosling, S. D. (2003). The do re mi’s of everyday life: The structure and personality correlates of music preferences.

How does the emotional context of an eyewitness episode affect memory and false memory? Specifically, memory tends to be biased towards negative emotional autobiographical events, but does that translate into increased false memory as well as memory?

Show this video of an altercation from surveillance submitted to the Broward Sheriff’s Office depicting an altercation in which an armed robbery occurs against three young people on spring break (though the teenagers foil the robbery): https://www.youtube.com/watch?v=DTq6Gu30-uA

Have participants read an eyewitness account that suggests that the person in the red and black flannel shirt was the first to start punching the perpetrator and how one of the perpetrators briefly revealed a knife—two pieces of misinformation to setup potential false memories. Including true details before, in-between, and after the misinformation items.

Porter, S., Spencer, L., & Birt, A.R. (2003). Blinded by emotion? Effect of the emotionality of a scene on susceptibility to false memories.

Other potential questions that you would need to seek IRB approval on your own should you want to present at a conference:

Where to look for other research question ideas:

Your research poster should include the following sections:

Here is an example of a poster that some students presented at the New England Psychological conference: 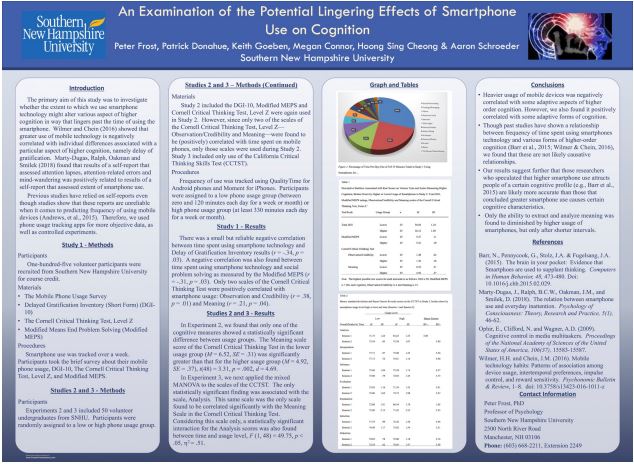 Here is an example of a poster based on survey research: 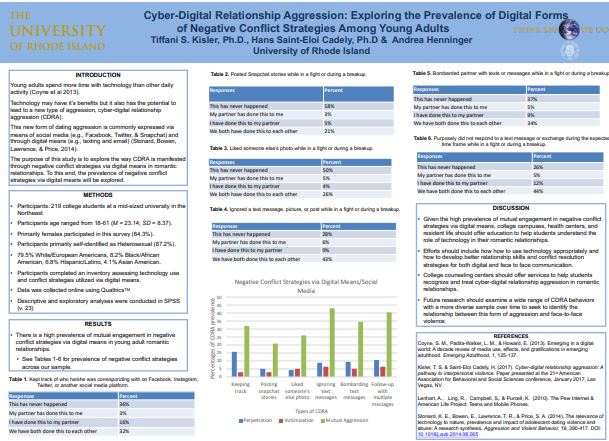 The Poster Session will be held Thursday, December 16th, 2021 during class from 12:30-1:45pm in the Wolak Library Learning Center (Shapiro Library) 2nd floor mezzanine. You will be expected to answer questions other students/visitors have about your poster. Grades will be based on the poster and participation in the poster session.